In the aftermath of the Rana Plaza catastrophe, the BMZ and the German Trade Union Confederation (DGB) joined forces to foster human rights in global supply chains. A few years later, the German Supply Chain Act ensures binding regulation on this issue. Georg Weininger works as the first Business Scout for Development at the DGB. In this interview, he provides a brief overview of his mission to get unions more involved in German development cooperation.

To watch the interview, click on the following link: Sustainable Supply Chains – From a Union Perspective 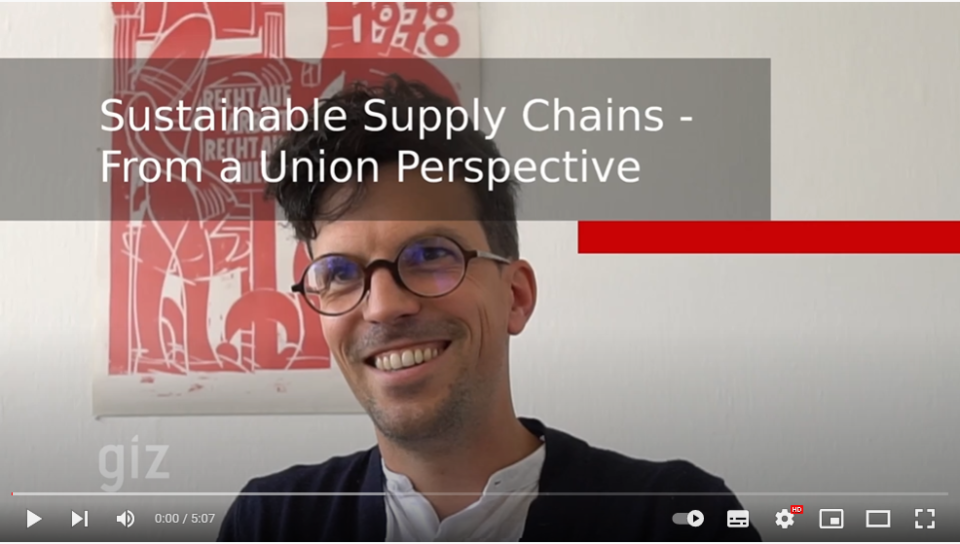 Business Scouts for Development work as development policy experts on behalf of the German Federal Ministry for Economic Cooperation and Development (BMZ). As such, they advise German, European and local companies and economic stakeholders on development policy matters. As part of GIZ´s project Promotion of Multi-Stakeholder Projects for Sustainable Textile Supply Chains, Georg Weininger is the first Scout at the German Trade Union Confederation (DGB). The interview sheds light on his mission to bring the worlds of the trade unionism and development cooperation closer together.

These cookies are session identifiers and help the server to assign the user to the correct session after reloading the page. Even if the page is opened in another tab, the server can assign the session number.

We use the open source software tool Matomo on our website. The tool uses cookies that allow us to count the number of visits. These text files are saved on your computer and enable us to analyse how its website is used. For us, your IP address is an anonymous code. This means we have no technical means of identifying you as a registered user. You will remain anonymous as a user. If you agree to the analysis of your data, please activate this cookie.

We have sent you an email to confirm your subscription.

Stay in the loop

Get updates on leverist.de with new opportunities and announcements.

leverist.de has launched a special call supporting companies in Ukraine and Moldova, as well as civil society organisations in Germany. Find out more on the special pages.